All Prices mentioned below are supposed to be valid till 11:59 PM US PST October 3rd, but Please double check the price before you download the book. Prices for eBooks changes every day (Sometimes, several times a day!)

The Ghost Files
Ever since her mother tried to kill her when she was five, Mattie Hathaway has been able to see ghosts.  Now at sixteen, it’s a normal part of her day but a secret she keeps to herself because being a foster child is difficult enough without also being labeled a freak.  Usually if she ignores the ghosts, they go away… until one day her foster sister Sally appears.  Mattie knows the truth about Sally – she’s not a runaway as everyone thinks… she was murdered.  Knowing she must help Sally, she teams up with a young police officer to discover the truth behind Sally’s murder.  What they find is a serial killer and Mattie may be his next victim.
Kindle Price: $0.00
Click here to download this book.

Seek and Hide: A Novel (Haven Seekers Book 1)
The government has taken control of the church and a special agency called the Constabulary enforces the re-translated Bible.  Marcus will do anything to his church family from prison, including risking everything to gain the trust of a government agent.  When the Constabulary threatened her baby, Aubrey recanted her faith and was thrown in prison.  Now she only wants to take care of her child and stay out of the government’s notice.  But for some reason, she’s still being targeted and this time, they take her son.  When their worlds collide, they both must face the lies about themselves and God takes Marcus’ hand to turn him from a loner into a leader.
Kindle Price: $0.00
Click here to download this book.

The Viking (The Viking Series Book 1)
Stefan finally gets his chance to go on his first Viking raid at not quite fifteen.  After boarding a long ship, they travel to Scotland where he finds the raid is not like he expected – and he is stranded alone in a foreign land.  Thirteen year old Kannak has just as serious a problem – her father deserted the family and, despite her mother’s objections, she decided the only way to survive is to be married.  But suddenly she finds herself helping a hated Viking escape.  Can she really hide him in the middle of a clan?  Why is someone trying to kill the clan’s laird?
Kindle Price: $0.00
Click here to download this book.

Strings
Nina was a drug addict who crossed the wrong people and to pay off her debt, she's worked in a mob owned brothel.  The Madam offers her a chance to take one more client - an eccentric billionaire - that will not only pay off her debt a month early, but leave with money to start a new life.  But what Nina finds within the walls of the Ballas house is unspeakable horror driven by madness.
Kindle Price: $0.00
Click here to download this book.

Three Sisters: A British Mystery (Emily Castles Mysteries)
Three Sisters is the first outing for amateur sleuth Emily Castles in this entertaining British mystery series from bestselling author Helen Smith. Emily is invited to a Halloween party hosted by a mysterious troupe of circus performers in London. When one of the performers is killed in front of her during a knife throwing act, no one will believe what she has seen. Is it an illusion? Or is it murder? Emily teams up with her neighbors to investigate.
Kindle Price: $0.99Click here to download this book.

Featured Kindle Device of the Day 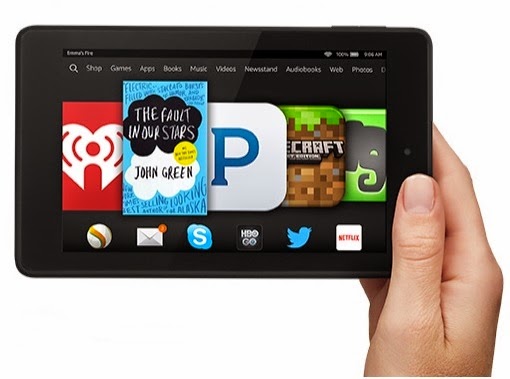 Fire HD 6 Tablet
The Fire HD comes in 6” and 7” versions and five colors – black, white, magenta, citron and cobalt. The new generation has a sharper display and a faster 1.5GHz quad core processor. Another impressive addition to the Fire HD is a back-facing camera capable of recording video at 1080p, along with a front-facing VGA camera.
Price: $99.00 FREE Shipping
Click here to purchase

Blades Of Magic: Crown Service #1
Seventeen-year-old Sara Fairchild is the daughter of a disgraced imperial commander who was executed for desertion.  She lives quietly with her family’s shame but when challenged about family honor, she’s quick to defend it as she is the best duelist and hand-to-hand fighter in Sandrin.  She finds out what her father’s last actions truly were and on the same night takes the Mercenary Guilds’ vow to serve in the emperor’s army.  Being skilled and quick witted, she earns a spot in the first division.  The Algaris empire is in turmoil and war has broken out between the mages.  Sara soon discovers secrets that both side of the mages want to remain hidden and she becomes hunted by dark forces.  In the midst of all this, she finds one other thing – passion.  Can she fight for the empire against the mage that may win her heart?  It’s only the first year of the Initiate Wars… and Sara hopes it won’t be her last.
Kindle Price: $0.00
Click here to download this book.