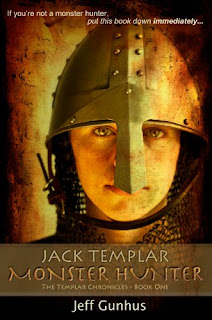 Jack Templar Monster Hunter
Orphan Jack Templar has no memory of his parents and only the smallest details from his Aunt Sophie about how they died. The day before Jack's fourteenth birthday, things start to change for him. At first it's great: A sudden new strength helps him defend his nose-picking friend "T-Rex" from the school bully, and even his crush, Cindy Adams, takes notice. But then a mysterious girl named Eva arrives and tells him two facts that will change his life forever. First, that he's the descendent of a long line of monster hunters and he's destined to be in the family business. Second, that there's a truce between man and monster that children are off-limits...until their fourteenth birthday! Jack has only one day before hundreds of monsters will descend on his little town of Sunnyvale and try to kill him.  As if that weren't enough, things get even more complicated when Jack discovers that the Lord of the Creach (as the monsters are collectively known) holds a personal grudge against him and will do anything to see that Jack has a slow and painful death. To stay alive and save his friends, Jack will have to battle werewolves, vampires, harpies, trolls, zombies and more. But perhaps the most dangerous thing he must face is the truth about his past. Why do the other hunters call him the last Templar? Why do they whisper that he may be the "One?" Why do the monsters want him dead so badly? Even as these questions plague him, he quickly discovers survival is his new full-time job and that in the world of monster hunters, nothing is really what it seems.
Kindle Price: $0.00
Click here to download this book. 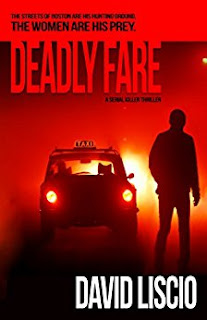 Deadly Fare
When beautiful young women begin to vanish from Boston Logan International Airport, State Police Lt. Hannah Summers is the only one who sees a pattern amidst the cold case files. She knows a killer is on the loose, and she’s determined to make her chauvinistic bosses believe her hunch about a gypsy cab driver -- before it’s too late. As the body count rises, so does the public’s panic. Under pressure from the district attorney to make the killings stop, Summers soon finds herself rubbing elbows with ex-Special Forces soldier Emmett Decker, a private investigator hired by the wealthy family of a missing local girl. The more their paths cross, the harder it is to deny they may be chasing the same monster -- and that the tension between them is more than purely professional. One thing is certain: the Boston Butcher must be stopped before any more women climb inside his cab... and wind up paying the ultimate price...
Kindle Price: $0.99
Click here to download this book.
Posted by Joisel at 12:00 AM