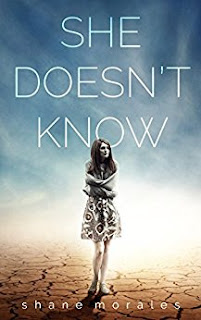 She Doesn't Know
Chloe Parker has just been uprooted to a tiny American compound in Saudi Arabia. You’d think after fourteen years of being an Air Force brat, she’d be used to being the new kid, but it still sucks. At least until she meets charming, charismatic Alex and falls for him hard.  But Alex is a year older and is heading off to boarding school in Switzerland. Chloe won’t see him again for nine months and it’s breaking her heart. She doesn’t even know if Alex likes her back until he gifts her his private binder of hand-written stories and song lyrics to remember him by. That has to mean something, right?  At long last the wait is over and Alex returns, but he's a haunted shell of his former self. Something bad happened while Alex was away, something that killed the light in his eyes, and Chloe is determined to help him. She has to get the old Alex back. But Chloe doesn’t know you can’t bring someone back from a place you’ve never been. All you can do is be there when they finally decide to come home.
Kindle Price: $0.00
Click here to download this book. 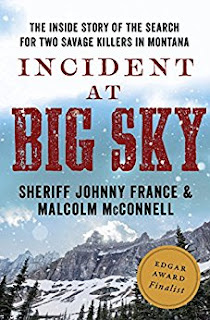 Incident at Big Sky
In the wilderness of Montana's Big Sky country, a young woman Olympic athlete, Kari Swenson, was kidnapped at gun point while on a training run. Searchers found her chained to a tree and guarded by two 'mountain men,' Don and Dan Nichols, father and son who had left civilization a dozen years before. In the ensuing confrontation, Kari was badly wounded by the younger Nichols and a rescuer was coldly shot and killed before the Nicholses made their escape, leaving Kari behind. The manhunt that followed featured FBI teams, helicopters, electronic aids, and massive manpower. In the end it was Johnny France, the local sheriff, who had spearheaded the search for months and who finally, by chance, tracked them down alone. He faced them in a real-life Clint Eastwood scene, and brought them in. What lay behind this crime? What sort of man was Sheriff Johnny France? What really happened up there in Spanish Peaks? It is all here in a bizarre and fascinating tale, told by the one man who knows it all.
Kindle Price: $1.99
Click here to download this book.
Posted by Joisel at 1:21 AM