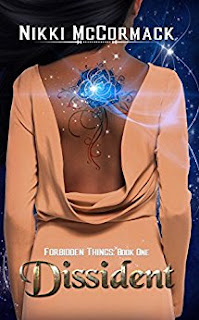 Dissident
Ascard power can strengthen, heal and create. It also has great potential to destroy, enough to topple entire governments. Indigo’s country places strict limitations on the use of ascard so she must channel her talents into the healing arts or risk severe punishment. An orphan from a disgraced family, trapped by her father’s treason, Indigo struggles to reclaim her place in a society that has driven her into an abusive engagement. Then a mysterious stranger from a neighboring country contacts her using ascard. He needs help escaping his prison so he can bring an end to his emperor's oppressive rule or die trying. His unshakable devotion to his cause and the passion hidden behind his cool arrogance move her to help him at the risk of being branded a traitor herself. When the politics of society bring them together a second time, Indigo decides to use her growing powers to help him fight his war. If only she dared fight for her own future with such passion. Perhaps she can find the courage to do so by helping the man she has fallen for win his revolution. She might have exactly the power he needs to succeed.
Kindle Price: $0.00
Click here to download this book. 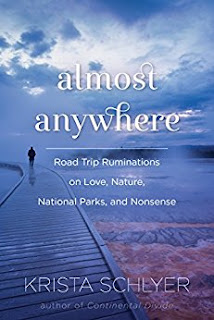 Almost Anywhere
At twenty-eight years old, Krista Schlyer sold almost everything she owned and packed the rest of it in a station wagon bound for the American wild. Her two best friends joined her—one a grumpy, grieving introvert, the other a feisty dog—and together they sought out every national park, historic site, forest, and wilderness they could get to before their money ran out or their minds gave in. The journey began as a desperate escape from urban isolation, heartbreak, and despair, but became an adventure beyond imagining. Chronicling their colorful escapade, Almost Anywhere explores the courage, cowardice, and heroics that live in all of us, as well as the life of nature and the nature of life.
Kindle Price: $1.99
Click here to download this book.
Posted by Joisel at 12:00 AM