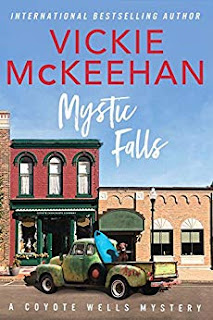 Mystic Falls
Emotionally reeling after the death of her grandmother, Gemma Channing is settling into Coyote Wells, the hometown where she grew up, after a ten-year absence. While trying to come to terms with the loss of her Gram, disturbing things begin to happen. Women are disappearing. Just when she begins to realize Coyote Wells has changed—and not for the better—she’s forced to bump heads with Lando Bonner, her ex, a man who still carries around a grudge. But since she’s digging for answers trying to explain exactly how her grandmother died, she needs his help. It won’t be easy. Lando has never forgiven her for leaving him. Tensions flair between the two as a killer grips the town in fear. Is it kill or be killed? Who will the killer target next? And when will it all end?
Kindle Price: $0.00
Click here to download this book. Genome
In 2003, the first human genome was sequenced. But the secrets it held were never revealed. The truth was discovered thirty years ago, almost by accident. Dr. Paul Kraus had spent his entire career searching for what he called humanity’s lost tribes—human ancestors who had gone extinct. When Kraus compared the DNA samples of the lost tribes with our own, he found a pattern of changes: a code. At the time, the technology didn't exist to unravel what it meant. To protect the secret, Keller hid his work and disappeared. Now the technology exists to finally understand the mysterious code buried in the human genome, but finding the pieces of Keller’s research is more dangerous than anyone imagined. Dr. Peyton Shaw and her mother have obtained part of Kraus’s research—and a cryptic message that could lead to the remaining pieces. They believe his work is the key to stopping a global conspiracy—and an event that will change humanity forever. The ultimate secret, buried in the human genome, will change our very understanding of what it means to be human. For Peyton, finding it may come at an incredible price. She must weigh the lives of strangers against those she loves: Desmond Hughes and her mother. With time running out, Peyton makes a fateful choice—one that can never be undone.
Kindle Price: $2.49
Click here to download this book.
Posted by Joisel at 12:00 AM