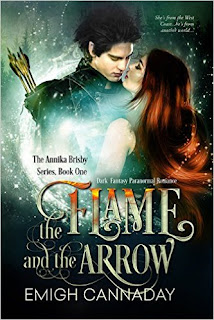 The Flame and the Arrow
Aspiring rock star Annika Brisby thinks she knows where her life is going until she steps through a broken portal that leaves her stranded in a realm of fairies, vampires, and other mythical beings. Unable to return until it's repaired, she's rescued by wood nymphs who believe her sudden arrival is no accident. After being taken in by a prominent family of elves, Annika finds herself struggling to resist the seductive spell of their youngest son, Talvi. Equal parts arrogant and alluring, the notorious heartbreaker seems like the perfect distraction for her homesickness. Her new friends warn her that she'll probably regret ever laying eyes on him, and what begins as a casual fling quickly burns too hot to handle. By the time Annika learns the consequences of their forbidden trysts, Talvi's already under her skin and dangerously close to her heart. But on the journey home she discovers that there's a mountain of secrets that he's not telling her, and Annika can't help wondering who's really in danger.
Kindle Price: $0.00
Click here to download this book. 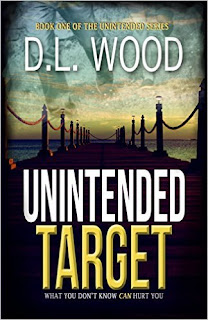 Unintended Target
Travel photojournalist Chloe McConnaughey thought she understood her brother Tate—a brilliant programmer willing to compromise anything to get ahead. She just didn’t know that included her. When Tate dies unexpectedly, Chloe copes by taking an assignment in the Caribbean where she meets Jack, a charming Manhattan escapee who almost has her believing life could turn around. But the illusion is shattered when a series of bizarre incidents leaves them framed for murder and running from killers convinced that Chloe is the key to questions Tate left behind. Suddenly Jack’s timely entrance into her life seems more than coincidental, but with nowhere else to turn, Chloe must trust this man who is not only charming, but also dangerous, and much better at evading capture than he should be.
Kindle Price: $0.99
Click here to download this book. 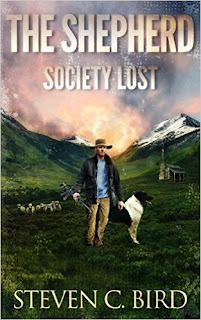 The Shepherd: Society Lost
Sanctuary soon becomes what he meant to escape, peaceful bliss slipping into desperation and despair in the aftermath of events that shook the foundations that shaped our world to the core. An unholy alliance of conspirators had sought the collapse of our civilization in order to rebuild and reclaim it as their own. Never truly intending to coexist, the unlikely allies found their courses diverging, leading to a struggle that dealt the final death blows to our society. In the absence of the order and structure of our modern civilization, evil, suffering, and chaos were unleashed throughout the world.  As the post-collapse struggles of the outside world begin to threaten Jessie’s mountain hideaway, a return to the world he left behind becomes a chance for redemption and survival in—a society lost.
Kindle Price: $0.99
Click here to download this book. 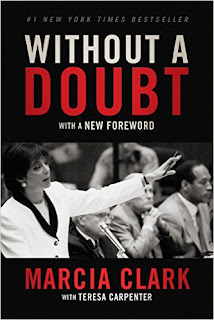 Without a Doubt
Without a Doubt is not just a book about a trial. It's a book about a woman. Marcia Clark takes us inside her head and her heart. Her voice is raw, incisive, disarming, unmistakable. Her story is both sweeping and deeply personal. How did she do it, day after day? What was it like, orchestrating the most controversial case of her career in the face of the media's relentless klieg lights? How did she fight her personal battles - those of a working mother balancing a crushing workload and a painful, very public divorce? When did she know that her case was lost? Who stood by her, and who abandoned her? And how did she cope with the outcome? As Clark shares the secrets of her own life, we understand for the first time why she identified so strongly with Nicole, in a way no man ever could. No one is spared in this unflinching account - least of all Clark herself, who candidly admits what she wishes she'd done differently - and, for the first time, we understand why the outcome was inevitable.
Kindle Price: $1.99
Click here to download this book. 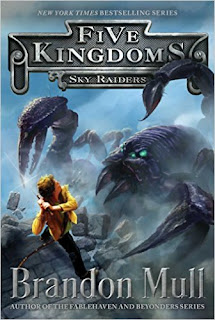 Sky Raiders
On Halloween below a haunted house, Cole Randolph wanted to have fun (and maybe get to know Jenna Hunt a little better). But he dives after friends whisked away to The Outskirts. The five kingdoms lie in between - wakefulness and dreaming, reality and imagination, life and death. Some people are born there. Some find their way there from other worlds. And once people are in the Outskirts, they find it very hard to leave. With the magic of the Outskirts starting to unravel, Cole and an unusual girl named Mira must rescue his friends, set things right in the Outskirts, and hopefully find his way back home…before his existence is forgotten.
Kindle Price: $1.99
Click here to download this book.