Hidden Monster
For seventeen-year-old Samantha Campbell, running back woods trails usually means freedom from her less-than-perfect life. That is, until the day a morning run turns into a living nightmare. When Samantha wakes up to find herself bound to a dirty, pinstriped mattress, she realizes she’s anything but free. With a masked abductor repeatedly injecting her arm with an unknown substance while holding her captive, Samantha tries in vain to find out what he wants, but he refuses to speak. Until the day he breaks his silence and his twisted words are worse than what she’d imagined. He promises her one day she will fall in love with him but the best part will be that she won't know who he is... until it's too late. Finding herself freed from captivity, with her captor still at large, Samantha is on guard against everything and everyone around her. Unfortunately, walling up her heart proves difficult when eighteen-year-old Blake Knightley moves in next door. When Samantha starts experiencing strange changes within her, she realizes her captor may have left her more damaged than she originally thought. Now she must turn to Blake for help in order to unearth the truth behind the monster who started this all... or risk experiencing worse things than just falling in love.
Kindle Price: $0.00
Click here to download this book. 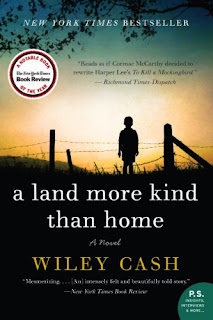 A Land More Kind Than Home
For a curious boy like Jess Hall, growing up in Marshall means trouble when your mother catches you spying on grown-ups. Adventurous and precocious, Jess is enormously protective of his older brother, Christopher, a mute whom everyone calls Stump. Though their mother has warned them not to snoop, Stump can't help sneaking a look at something he's not supposed to - an act that will have catastrophic repercussions, shattering both his world and Jess's. It's a wrenching event that thrusts Jess into an adulthood for which he's not prepared. While there is much about the world that still confuses him, he now knows that a new understanding can bring not only a growing danger and evil - but also the possibility of freedom and deliverance as well. Told by three resonant and evocative characters - Jess; Adelaide Lyle, the town midwife and moral conscience; and Clem Barefield, a sheriff with his own painful past - A Land More Kind Than Home is a haunting tale of courage in the face of cruelty and the power of love to overcome the darkness that lives in us all. These are masterful portrayals, written with assurance and truth, and they show us the extraordinary promise of this remarkable first novel.
Kindle Price: $1.99
Click here to download this book.