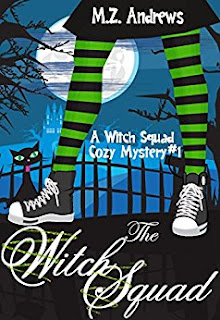 The Witch Squad
Nineteen-year-old Mercy Habernackle is a witch gone off the rails. Causing problems with the law in her hometown, she’s faced with two options. Go to a correctional institution or get shipped off to witch boarding school, or as her mother prefers to call it, finishing school. Choosing the latter, Mercy’s mother, Linda, drives her daughter cross country to the Paranormal Institute for Witches, situated high in the beautiful Appalachian Mountains in cozy, Aspen Falls, Pennsylvania. Upon arrival, Mercy is faced with cheerful smiles, friendly people, and a sticky sweet roommate who has turned their dorm room into an advertisement for the Pottery Barn. Mercy had hoped her fellow witches would be more like her, dark, dreary, and a little bit self-destructive.  When the murder of a local teenager takes place on the first day of class, Sorceress Stone, headmistress of the college for wayward witches, takes the class on a consulting job to help the Aspen Falls Police Department solve the murder. Mercy and her mismatched classmates find themselves in the heart of the murder investigation and when the body of the murder victim suddenly goes missing and her roommate turns up abducted, Mercy must put aside her feelings of resentment about her gift and put her paranormal abilities to good use.
Kindle Price: $0.00
Click here to download this book. 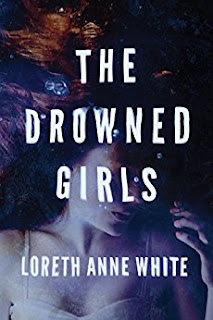 The Drowned Girls
He surfaced two years ago. Then he disappeared ... But Detective Angie Pallorino never forgot the violent rapist who left a distinctive calling card—crosses etched into the flesh of his victim’s foreheads. When a comatose Jane Doe is found in a local cemetery, sexually assaulted, mutilated, and nearly drowned, Angie is struck by the eerie similarities to her earlier unsolved rapes. Could he be back? Then the body of a drowned young woman floats up in the Gorge, also bearing the marks of the serial rapist, and the hunt for a predator becomes a hunt for a killer. Assigned to the joint investigative task force, Angie is more than ready to prove that she has what it takes to break into the all-male homicide division. But her private life collides with her professional ambitions when she’s introduced to her temporary partner, James Maddocks—a man she’d met the night before in an intense, anonymous encounter. Together, Angie and Maddocks agree to put that night behind them. But as their search for the killer intensifies so does their mutual desire. And Angie’s forays into the mind of a monster shake lose some unsettling secrets about her own past . . .
Kindle Price: $1.99
Click here to download this book.
Posted by Joisel at 12:00 AM