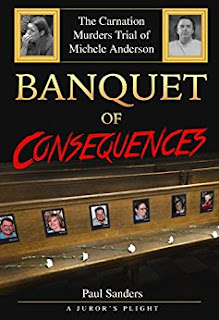 Banquet of Consequences
On Christmas Eve 2007, Judy and Wayne Anderson’s daughter, Michele and her boyfriend, Joseph McEnroe, arrived at their home for a family meal.  Unbeknownst to them, their daughter was armed with a loaded 9 mm pistol and McEnroe was carrying a .357 Magnum. Both parents were callously shot dead by the pair and their bodies hidden from view.  Two and a half hours later, Michele’s brother Scott, his wife Erica and their two children, Olivia (5) and Nathan (3), arrived at the house. Within the hour, they too had been pitilessly slain, in an act of violence that was breath-taking in its scope and cruelty.  With his highly-anticipated third book, Paul Sanders takes the reader inside every day of the trial of Michele Anderson with his customary attention to detail, from December 2015 until March 2016.  And in a unique digression from his other works, Sanders includes something he has never done before. An interview with one of the killers, Joseph McEnroe, at Walla Walla Penitentiary.
Kindle Price: $0.00
Click here to download this book. 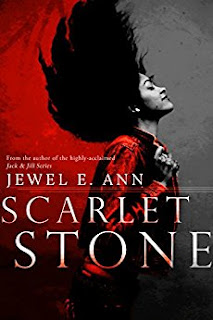 Scarlet Stone
What happens when life just stops? When one moment makes you question your entire existence? Scarlet Stone is a third-generation thief who has everything: a doting fiancé, a spacious London flat, and a legitimate job offer. In a single breath, everything becomes nothing, and she finds herself on a plane to Savannah, Georgia in search of the meaning of life. After securing a six-month lease for a beachfront house on Tybee Island, Scarlet changes the way she looks, thinks, eats—basically her entire outlook on life. She needs peace, but what she gets is a housemate who looks like Thor, acts like a warden, and smells her proximity like a Bloodhound. Theodore Reed is a carpenter and perfectionist with a body built of steel, a black, hollow heart, and a hunger for revenge. He doesn’t like company, girly-smelling crap, and British accents. He resents every breath she takes. She’s fascinated by his every move. In time, they discover their coexistence is toxic, their physical attraction is electric, the secrets they keep mean the difference between life and death, and the only truth they share is that everything is a lie.
Kindle Price: $0.99
Click here to download this book.
Posted by Joisel at 3:43 AM