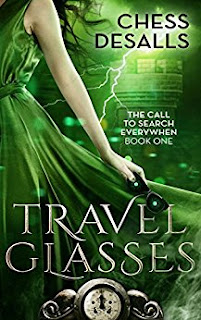 Travel Glasses
Calla Winston’s mobile devices sit in a corner of her room, covered in dust. Weeks ago, she shared photos and laughs with her best online friend. Now, after having felt the sting of betrayal, she prefers being hidden and friendless. She equates privacy with security and technology with pain. Then she meets Valcas, an otherworldly time traveler who traverses time and space with a pair of altered sunglasses. When an ethereal being knocks Calla to the ground near her family’s lakeside cottage, Valcas uses the Travel Glasses to help her escape. He offers his further protection in exchange for a promise. Intrigued by Valcas and the possibility of time travel, Calla accepts. That is until she learns that his search for her was no mere coincidence. Calla sets off on her own, taking the Travel Glasses with her. Torn between searching for her estranged father and reuniting with the rest of her family, she tracks down the inventor of the Travel Glasses in hopes of discovering more about Valcas’ past and motivations. The Travel Glasses take Calla’s mistrust of technology to all new levels. But without them, she’ll never make it back home. With Valcas hot on her trail, Calla hopes to find what she’s looking for before he catches up.
Kindle Price: $0.00
Click here to download this book. 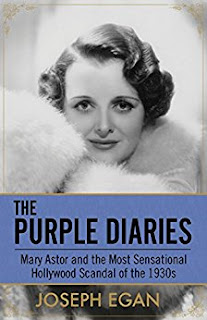 The Purple Diaries
1936 looked like it would be a great year for the movie industry. With the economy picking up after the Great Depression, Americans everywhere were sitting in the dark watching the stars and few stars shined as brightly as one of America's most enduring screen favorites, Mary Astor. But Astor's story wasn't a happy one. She was born poor, and at the first sign that she could earn money, her parents grabbed the reins and the checks. Widowed at twenty-four, Mary Astor was looking for stability when she met and wed Dr. Franklyn Thorpe. But the marriage was rocky from the start; both were unfaithful, but they did not divorce until after Mary Astor gave birth to little Marylyn Thorpe. What followed was a custody battle that pushed The Spanish Civil War and Hitler's 1936 Olympic Games off of the front pages all over America. Astor and Thorpe were both ruthless in their fight to gain custody of their daughter, but Thorpe held a trump card: the diaries that Mary Astor had been keeping for years. In these diaries, Astor detailed her own affairs as well as the myriad dalliances of some of Hollywood's biggest names. The studio heads, longtime controllers of public perception, were desperate to keep such juicy details from leaking.
Kindle Price: $1.99
Click here to download this book.
Posted by Joisel at 3:56 AM